Dominica’s Road to Climate Resilience by 2030, Sponsored by CBI

The President of the Commonwealth of Dominica, Charles Savarin, stated at the UN General Assembly in New York on September 27th, that Dominica aims to become the world’s first climate resilient nation by 2030.

Dominica has long-since been recognised for its vast natural environment. Following the passage of Hurricane Maria in 2017, Prime Minister Roosevelt Skerrit who pledged to make the Nature Isle of the Caribbean “the world’s first climate-resilient nation” and astounding efforts have been invested towards this, earning Dominica international acclaim. 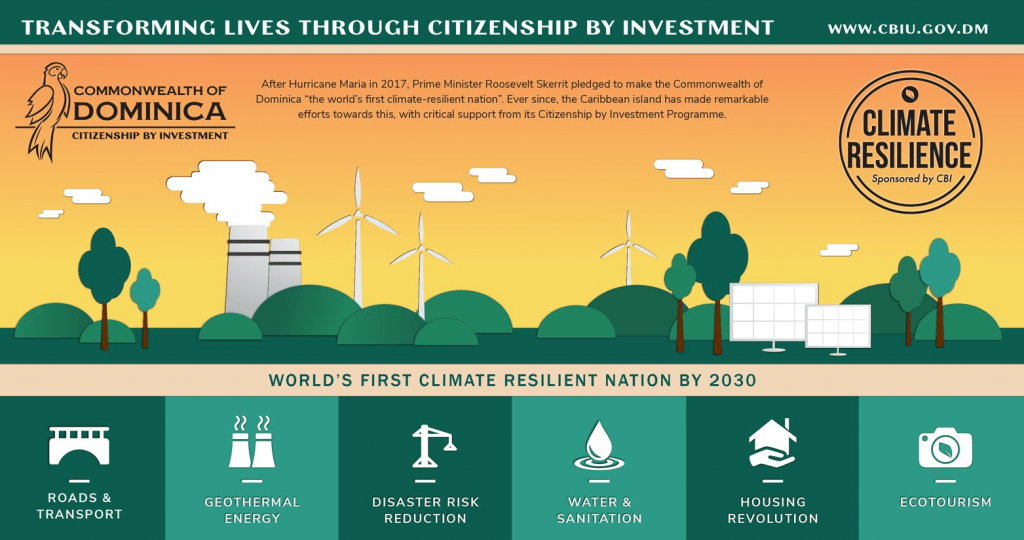 As climate change becomes a central topic on the global socio-political agenda, Dominica – a small island with a population of over 70,000 citizens – has sprung into action without delay, to minimise the potential threats of global warming. Shortly after Hurricane Maria, PM Skerrit announced the formalisation of CREAD – the Climate Resilience Execution Agency of Dominica. The purpose of the agency was to streamline procedures in the country’s efforts to incorporate resilience into all aspects of society. The initiative received widespread support, notably from the World Bank and the United Kingdom. In a CREAD bill presented to the Dominican Parliament, details of the rationale behind the agency were announced, including functions of the board, duties of CREAD and where the funds and resources would stem from.

Two years later, Dominica continues to make significant strides towards its goal. The construction on the 7-Megawatt geothermal plant is expected to begin in the following months, President Savarin announced. Ian Douglas, the Minister of Trade, Energy and Employment, said that “with the commissioning of this plant, we will be in a position to benefit from clean, reliable, low-cost, renewable, high-quality energy supply in the future, which will benefit all sectors of productive activity in Dominica.”  The plant received initial funding from the Caribbean Development Bank, the Inter-American Development Bank, and the country’s successful Citizenship by Investment (CBI) Programme. In May 2019, the Government of Dominica secured another $27 million financing agreement from the World Bank towards the development of the geothermal plant. Once completed, citizens will be able to harness sustainable energy to power and heat their homes, thus significantly reducing their utility bills.

Besides energy security, the Dominican government is also focused on ‘building back better’ (BBB) – an axiom widely adopted by the island’s residents who are rehabilitating, rebuilding or designing their homes more durably. Last year, Dominica launched an unprecedented public housing programme to build new modern homes for families that were affected by Hurricane Maria and Storm Erika in recent years. The end of 2018 bore witness to the first thirty-eight families receiving the keys to their new homes, and many more followed since. The ‘Housing Revolution’, as it is often referred to, abides by the BBB concept which combines modern building techniques with a framework that ensures that these homes can withstand any weather events imaginable – an admirable feat of its own. The ‘Housing Revolution’ will continue throughout 2019 and 2020 and expected to build over 5,000 homes. It is entirely funded by the country’s CBI Programme.

Things are evolving rapidly even on the anti-pollution front. Dominica’s plastic ban – introduced last year – came into effect as of January 1st, 2019. The ban was described by National Geographic as one of the world’s most comprehensive plastic bans, an initiative that was followed by the European Union shortly after. As plastic is a major contributor to marine and land pollution, the government considers this a step in the right direction.

The last year has seen Dominica dedicate itself to revitalising the island by way of its CBI Programme, which continues to inspire growth in various sectors. While the road to climate resilience is undeniably a long one, it seems that the Nature Isle is well on its way to achieving it in the promised timeframe, if not earlier.