The Quest for Renewable Energy in Dominica

A small island it may be, but Dominica’s aspirations are far from little.

With 2017’s Hurricane Maria serving as a catalyst, the Government of Dominica have since embarked on a journey towards climate resilience. Immediately after, Prime Minister Roosevelt Skerrit announced that the island would become the ‘world’s first climate resilient nation’, a feat that has since proven to be an upward battle but incredibly necessary all the same.

As a small island located in the Hurricane Belt, Dominica’s journey is perceived as the right way to tackle the potential nearby climate challenges at national level, whole advocating for a consolidated effort as a global community Although the island is not contributing with nowhere near as much greenhouse gas emissions as larger nations, the government took immediate action, determined to protect its citizens and its natural wealth.

One of the areas the Government was primarily committed to enhancing was Dominica’s potential for renewable energy. The power system currently relies on diesel fuel to produce electricity and is known to have one of the highest average prices in the world, priced at approximately USD 0.33/kW. After Hurricane Maria, around 75% of that power system was damaged and some parts of the island were left without electricity for a short period. Since at least 2008, there has been an active dialogue around the idea of harvesting geothermal energy for the island and theoretically exporting energy to neighbouring countries Martinique and Guadeloupe. The same year, the European Union offered to financially support Dominica’s geothermal potential and a cohesive analysis in the form of test drilling, feasibility studies and preparing infrastructure was carried out. Reports found that Dominica holds a 40MW power plant capacity, stressing the importance for the island to tap more into renewable energy. 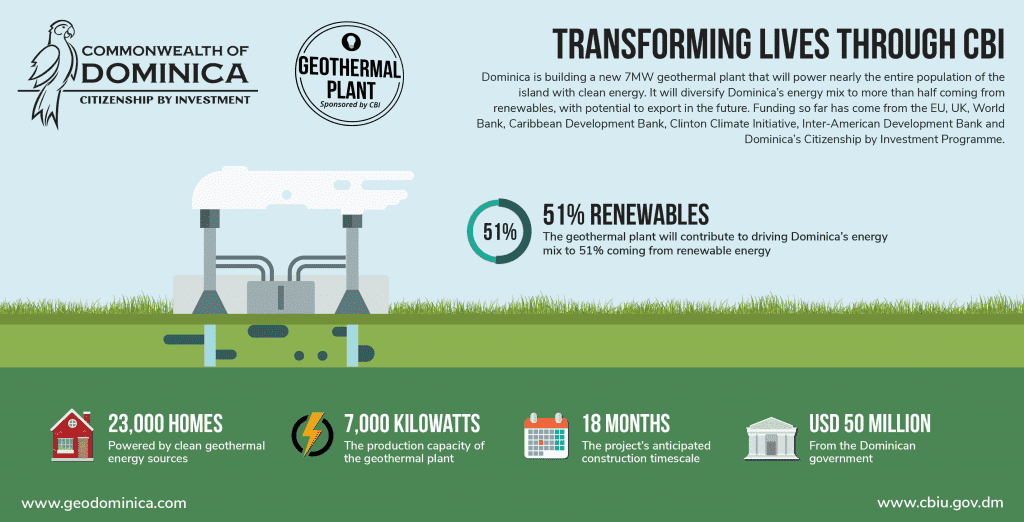 In September, President Charles Savarin announced that construction on a 7MW geothermal plant would begin very soon. Meanwhile, well testing on the drill sites in Laudat and Titou Gorge are planned between 8-23 October 2019.

The plant will be located on the outskirts of the capital, within the Roseau Valley, and is anticipated to power 23,000 homes with clean energy, accounting for ninety percent of the population. The project will inevitably benefit Dominican citizens by significantly lowering their electricity costs, increasing the island’s share of renewable energy by 30%, reducing greenhouse gas emissions and even bringing additional income to the island by exporting homegrown geothermal energy. Energy Minister Ian Douglas said that this would extend to other sectors of Dominica’s economy, referring to businesses’ lower maintenance costs. energy supply in the future, which will benefit all sectors of productive activity in Dominica.”

How Does Geothermal Energy Work?

A geothermal plant works similar to a coal or nuclear plant but instead of using a boiler or a reactor, the heat comes from within the Earth. Not only does geothermal energy produce far less emissions than fossil fuels, but it is also a sustainable and renewable form of energy. This can then be used within homes for electricity and heating, at an affordable price in the long run. The project is anticipated to take from eighteen months to possibly two years with the plant’s operational life expected to be some 25 years. The Government of Dominica are investing in long-term sustainable projects, something that can be beneficial not just for the citizens of Dominica today, but for generations to come.

Dominica’s fight for climate resilience has been internationally recognised and supported by several international bodies. Most recently, the World Bank recently signed a $27 million financing agreement for the geothermal plant – the first project of its kind in the Caribbean in thirty years.

Alongside the World Bank are both the Caribbean Development Bank and the Inter-American Development Bank which have also provided funding for the mass-scale project. Dominica has also caught the attention of global governing bodies including the UK Government who have pledged £65 million to support Dominica in its search for climate resilience. The Caribbean island has even gained the support of former US President Bill Clinton who commended Dominica’s efforts and testified that the nation could ‘lead the way in producing clean energy’. A new programme from the European Union has also been announced which will support Dominica’s renewable energy sector through a multitude of ways. One of its aims is to render the country’s international airport energy-independent and disaster-resilient by installing a solar power plant within the airport.

Besides international entities supporting Dominica’s goal, the island itself has also extensively funded the project via its world-leading Citizenship by Investment (CBI) Programme – an initiative that enables global individuals and their immediate relatives to acquire citizenship through a monetary contribution. The Programme offers two routes of investment: contributing to the Economic Diversification Fund (EDF) or buying into selected real estate. Revenue generated from CBI is then directed towards Dominica’s national advancement, from healthcare to infrastructure and all aspects of life on the island, as noted by PwC experts. The Programme is one of the oldest in existence and has been in operation since 1993, earning its place as the world’s best offering for second citizenship for the last three consecutive years.

The geothermal development project is not the only eco-friendly development that Dominica is investing in. Another mass-scale initiative titled the ‘Housing Revolution’ is also fully underway on the island. It aims to build up to 5,000 affordable and weather-resistant homes across Dominica with funding solely generated from CBI. The island also introduced a plastic ban earlier this year which was described by National Geographic as one of the most comprehensive bans ever implemented.

Dominica has continued to take things a step further with its recent ban of single-use plastic bags as of next year.  The island’s commitment to climate resilience has bolstered Dominica’s place within ecotourism. With a long list of resorts having already debuted on the island this year, eco-conscious developers have made sure that their properties follow a construction and maintenance framework rooted in sustainability and care of its natural surroundings and neighbouring communities.

Recently, Dominica has commanded global attention through its dedication to climate resilience and each milestone has brought the island a little closer to its goal to become fully climate resilient before the end of the following decade. With geothermal energy now on the cards, native and economic citizens of Dominica can rest assured knowing that their government is devoted to both the island’s socio-economic advancement and doing its part in the global fight against climate change.